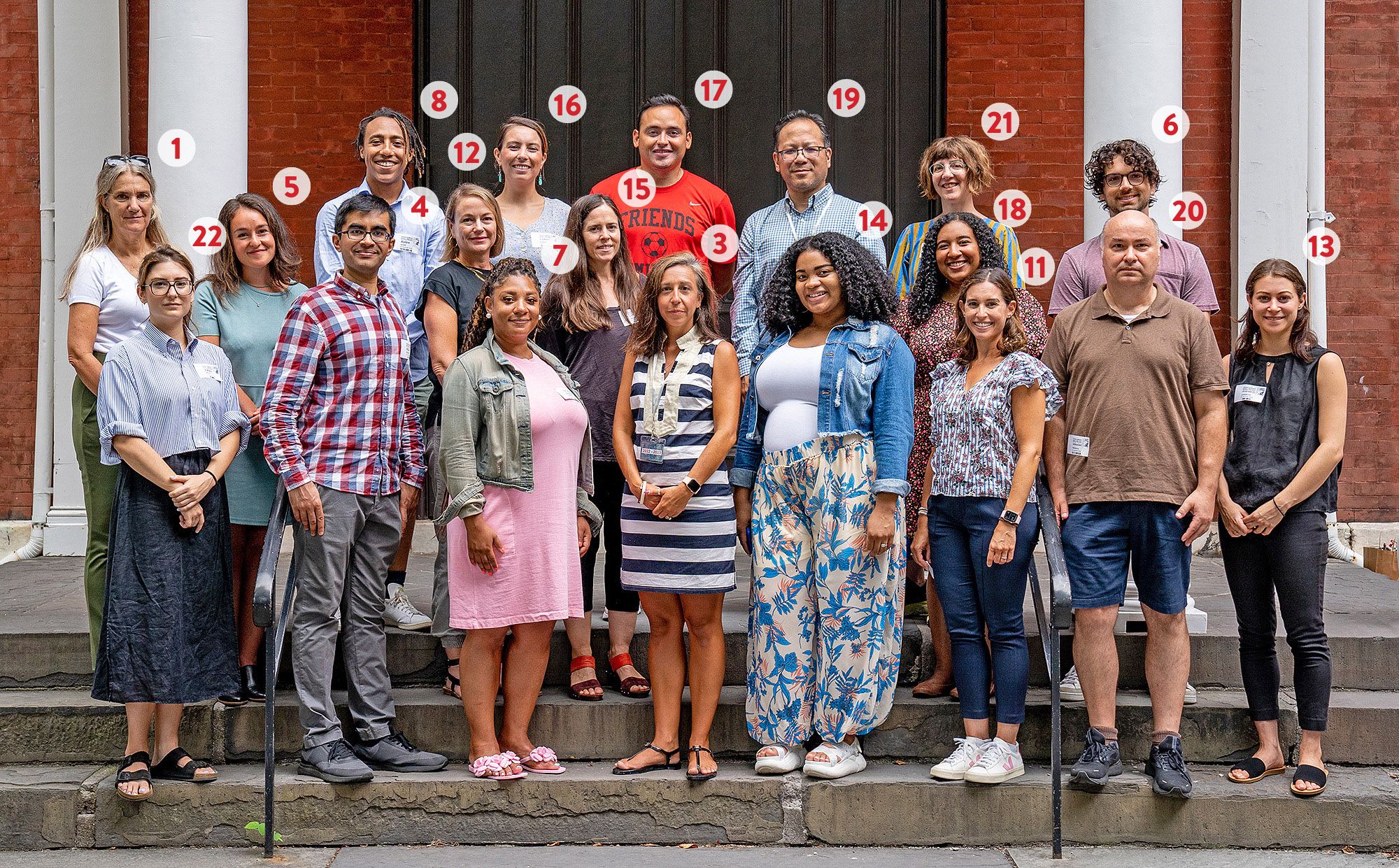 1. Vera-Germaine Adams joins us as our new Middle School Computer Science, Engineering and Design teacher. Her graduate degrees include a MAT from Queens University and a MPH from the University of Hawaii. She received her undergraduate BSN from San Diego State University. Prior to joining Friends, Vera taught science, technology, engineering, math and computational thinking. She also worked as an Innovation Coach at Costa Rica Country Day School.

2. Kyla Campbell (not pictured) is the newest member of our Communications team. She joined us in January as our new Graphic Designer. She holds a BS in Visual Communications from Farmingdale State College. Prior to joining Friends, Kyla was at NFM Lending as a Graphic Designer and spent five years freelancing for her clients. She is currently taking a motion design course to bring life to her designs. In her free time, Kyla geeks out over typography, music, design and growing her green thumb.

3. Michelle Cristella joins us as our new Head of Middle School. She graduated from Pennsylvania State University with a BA in Political Science, followed by a Master's in the Art of Teaching from Towson University in Maryland. She also received her Certificate in Advanced Educational Leadership from the Harvard Graduate School of Education. Before joining Friends, she was the Middle School Head at Speyer Legacy School. She worked at Speyer since 2011, where not only did she serve as Middle School Head, but prior to that she also taught, was the Director of Secondary School Placement, and was the Dean of Students for Grades K-8. Prior to her work at Speyer, Michelle held various teaching and administrative roles at The Mandell School (NY), Williamsburg Charter High School (NY), and several public schools in Maryland. She is delighted to join the Friends community.

4. Neil Desai is excited to be teaching World History for Grades 9 and 10 in the Upper School. He earned his BA in Sanskrit and his MS in Finance from the University of Virginia, in addition to an MA in Social Studies Pedagogy from the Relay Graduate School of Education. He joins us from Uncommon Leadership Charter High School where he taught AP World History.

5. Jenny Flaumenhaft joins us as an Associate Teacher in Grade 1. She earned her MA in Teaching & Curriculum Design from Columbia University Teachers College. Prior to graduate school, Jenny received her BA from Colby College. She worked as a Kindergarten teacher in Boston and taught on a Fulbright Scholarship in Thailand. Jenny’s teaching, graduate and undergraduate work has focused on innovative, hands-on and student-centered learning.

6. Chris Gouchoe returns to Friends as our new Grade 2 Associate Teacher. He holds a BA in Literature and Philosophy from Boston College. Last year, Chris joined Friends as one of our invaluable floating substitute teachers. Prior to joining Friends, he lived in California and worked in the film and technology industries.

7. Lauren Graham joins us as a Kindergarten Associate Teacher. A native of Washington, D.C., she currently lives in the Bronx. She earned her Bachelor's degree in Vocal Performance from the University of the District of Columbia in 2013, then went on to attend the New York Film Academy for musical theater. While in New York, Lauren fell in love with children while teaching music classes at Gymboree Play and Music. She received her M.S.ED in Early Childhood General Education from Bank Street College of Education in 2022. Lauren previously worked as a full-time Nursery School/Kindergarten Associate Teacher at the Bank Street School for Children. She was drawn to Friends because of its long-standing reputation of being committed to social justice and advocacy work.

8. Kaleo Grant, our new Extended Programs Associate, is a native New Yorker and 2020 graduate from Pitzer College. After earning his BA in Philosophy with a minor in Black Feminist Sociology, Kaleo worked at Little Red School House as an assistant teacher and The St. Lukes School as a substitute teacher and assistant coach.

9. Sydney Greene (not pictured) joined us last November as the Admissions Assistant. Previously, Sydney was working with College Forward, a non-profit organization based in Austin, TX that provides resources and support for first-generation college students. Sydney studied Biology at both Howard University and The University of Texas at Arlington, earning her BS from the latter.

10. Winston Johnson (not pictured) joined us last year as the newest member of our Technology Department. He holds a BS in Web Page Development from SUNY Alfred State College. Before joining Friends, he worked as a repair technician at Apple Inc. for seven years. His background and passion for technology make him a great addition to the Tech team and the Friends Community.

12. Kara Kutner joins us as the Director of the Center for Peace, Equity and Justice. Previously she was at Marymount School where she has served in many roles over the past 20 years—most recently as Director of Academic and Global Programs and Director of College Counseling—including Dean of Students and Upper School Spanish Teacher. Fluent in Spanish, Kara spent the first eight years of her career teaching English and English as a second language to Upper School students in Leone, American Samoa and Lower School students in Madrid, Spain. Her broad experience as an administrator working with students, parents and faculty; developing and leading global education programs; and supporting Diversity, Equity and Belonging programs have prepared her well for this important and unique appointment at Friends Seminary.

13. Elizabeth Lipshutz is excited to join Friends Seminary where she will be teaching Science in the Middle School for Grades 5 and 7. She earned her BA in Psychology from the University of California, Los Angeles and her MA in Curriculum in Teaching from Teachers College, Columbia University. Before receiving her MA, Elizabeth was an Upper School Assistant Science Teacher at Mirman School in Los Angeles.

14. Tamika Lynch joined us in the Infirmary last year as our Certified Nursing Assistant. Tamika has over 5 years experience working as a Nursing Assistant in a variety of different settings including childcare, hospice care and rehabilitation. While working at All Medical, Tamika supervised staff and helped administer Covid tests in schools all throughout Manhattan and Brooklyn. She works closely with our School Nurse, Tyler Troppmann, handling the day to day management of the infirmary.

15. Sam Margles joins the Friends Admissions team as the Director of Financial Aid and Affordability and Assistant Director of Admissions. Sam holds a BA from Hamilton College and an MSEd from Lehman College. Prior to joining Friends, Sam was Director of Secondary School Placement at the Speyer Legacy School and Director of Admissions, Grades 7-12 and a life science and math teacher at the Rudolf Steiner School.

16. Casey Powell (she/her) joins us as our new Health and Wellness Educator. She holds a BA from the University of Vermont in Psychology and Gender, Sexuality, and Women's studies. She was most recently the Emotional Intelligence Coordinator at Phillips Brooks School, a private PreK-5 school in San Francisco. Her formal training includes social and emotional learning, the gender spectrum, and adolescent puberty education. Casey strongly believes in age-appropriate health and wellness education as it empowers youth to make informed decisions about their bodies, brains, and relational bonds. When she is not teaching, you can find Casey at a local farmers market buying too much produce or dancing to bad pop music.

17. Kevin Romero joins us as our new Physical Education Teacher. He holds a BS in Physical Education from Queens College. He comes to Friends from Growing Up Green Charter School in Queens. Kevin moved to New York from El Salvador in 2010 to play soccer for the New York Redbulls U18/U23 and was a member of the Men's Soccer team at Baruch College. He has coached ages 2-18 for Super Soccer Stars and Soccer Stars United for the past 10 years and has been coaching the Friends JV boys soccer team for the past six years achieving two championships.

18. Rosalind Saidian joins us as a new Kindergarten Associate Teacher. She holds a BA in Spanish and Linguistics from New York University and is currently pursuing her Master's degree is Early Childhood Education from Hunter College. She comes to Friends from The Chapin School where she taught First Grade as an Associate Teacher.

19. Ray Shaw is excited to join us as the new Lower School Psychologist. He completed his PhD in Psychology at Columbia University and earned a BA at the University of Michigan. Prior to coming to Friends, he worked at the Family Centered Care unit at Jacobi Medical Center.

20. Sebastian Stoenescu will be teaching Mathematics this year in the Upper School. He received his BS in Mathematics from SUNY, Stony Brook. Upon graduating he worked as a college assistant at Kingsborough Community College. He went on to teach at CCNY Summer Scholars Academy, Stuyvesant High School, New York Math Circle, and most recently, Hunter College High School. In addition to teaching, Sebastian also coached Hunter’s Grade 9, junior and senior math teams.

21. Suzie Treinen joins us as a new Lower School Visual Arts and Shop teacher. She earned a BA from Grinnell College and an MFA in printmaking from the University of Nebraska-Lincoln. After working as a teaching artist for STUDIO in a School, she received her teaching certificate in art education from Brooklyn College and taught art in the NYC DOE. She comes to Friends from the Spence School where she taught Lower School Visual Arts.

22. Emma Weiss is so pleased to join Friends as the new Choral Director. She holds a BA in Music from Skidmore College and an MA in Musical Theatre Music Directing from the Royal Conservatoire of Scotland. Emma joins Friends after working as a professional music director for theatrical productions across the country as well as in private schools in New York City.

23. Trent Williams (not pictured) joins the Performing Arts department as our new Middle School drama teacher and director. He is no stranger to Friends, having worked in various different roles including teaching history and science in the Middle School. Trent earned his BFA in Acting and Musical Theater from Longwood University and his MFA in Acting from NYU. Trent brings with him many years of experience as a choreographer, actor and teacher.
Back
Friends Seminary actively promotes diversity, equity, inclusion, and anti-racism in all its programs and operations, including admissions, financial aid, hiring, and all facets of the educational experience. To form a community which strives to reflect the world’s diversity, we do not discriminate on the basis of race or color, religion, nationality, ethnicity, economic background, physical ability, sex, gender identity or expression, or sexual orientation. Friends Seminary is an equal opportunity employer.
Friends Seminary — the oldest continuously operated, coeducational school in NYC — serves college-bound day students in Kindergarten-Grade 12.
FRIENDS SEMINARY
222 East 16th Street
New York, NY 10003
P: 212-979-5030
F: 212.979.5034